Inside: Adorable character day for spirit week ideas to get you in the school spirit.

Spirit week is one of the best weeks out of the entire school year, and you can’t prove me wrong. It’s full of themes, fun games, costumes, and loads more.

It’s exactly what everyone needs in the middle of the school year to put a little extra pep in their step.

Some of the best memories are made by showing up and seeing your friend dressed up in hilarious costumes, or dressing up together as a group!

It’s truly a bonding experience for everyone, including the staff. 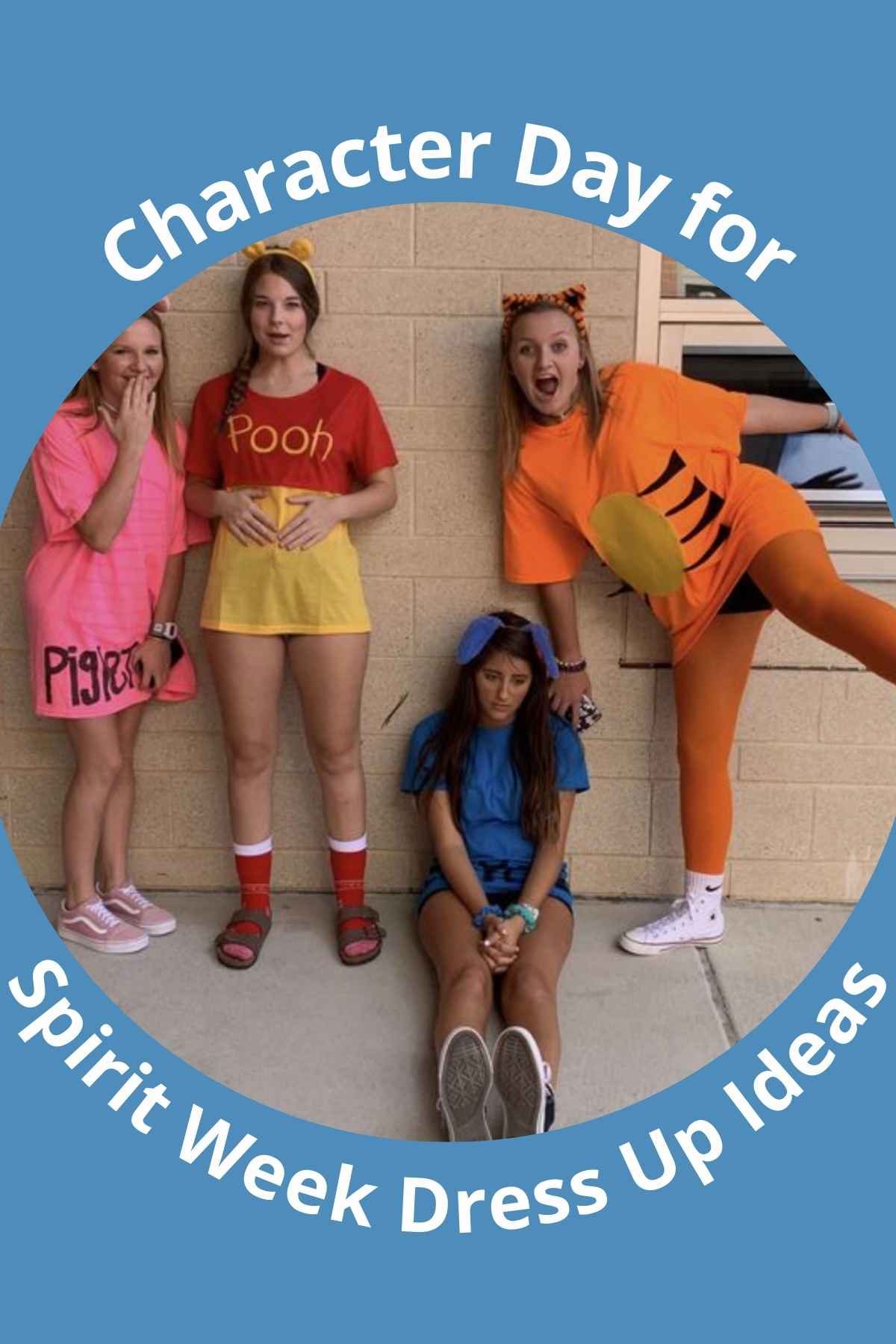 My favorite day of all the various themes has to be character day. Character day is essentially exactly like it sounds, a day where you come to school dressed as a character. Your favorite character in fact!

1. Winnie the Pooh Costumes – Winnie the Pooh is such an adorable and timeless character, and he is perfect for this themed day! You can easily achieve this look with a red t-shirt and some yellow ears.

2. Woody and Buzz – Everyone has seen Toy Story, so naturally these outfits are winners. Especially if you write andy on the bottom of your shoe. What a cute touch, right?

3. Monsters Inc Characters – Monsters Inc. was my childhood in movie form, and it makes me so happy to see that teens are still repping these characters!

4. Alvin and the Chipmunks – This may require some friends, but it’s so cute that it’s worth it!

5. Minion – Just get yourself some hilariously big circle glasses, a pair of overalls, and a yellow shirt. That’s it!

6. Lilo and Stitch – For lilo and stitch, you can order a costume, or you can be simple with it and draw on some t-shirts to make your very own costume. These are too cute.

7. Orange Blossom – Did you ever watch Strawberry Shortcake? Orange blossom was my favorite character, so it was so cool to see this girl recreate her look! She did such a great job.

9. iCarly Character – This one is a little more niche, but pop culture references are never a bad idea!

10. Clueless – Clueless was an iconic movie that came out in the 1990s, and the love for it has never died. How could it? It’s full of amazing outfits, quotes, and actors. It will go down in history!

11. Mean Girls – Mean Girls is basically the 2000s version of clueless. It’s equally loved, and as time goes on I feel like it will age in the same way the iconic 80s movie did.

13. Up Characters – Up is such a cute movie to pull characters from. You can be the old man, or Russell, or even Doug!

14. Rosie the Riveter – An empowering outfit for strong women!

15. Napoleon Dynamite – Hilariously on point for character day. This one would be pretty easy to achieve, and it will spread joy everywhere you go.

18. Arthur – Arthur was the go-to cartoon for many people during their childhood. Now the character is a fan favorite pick for character day! 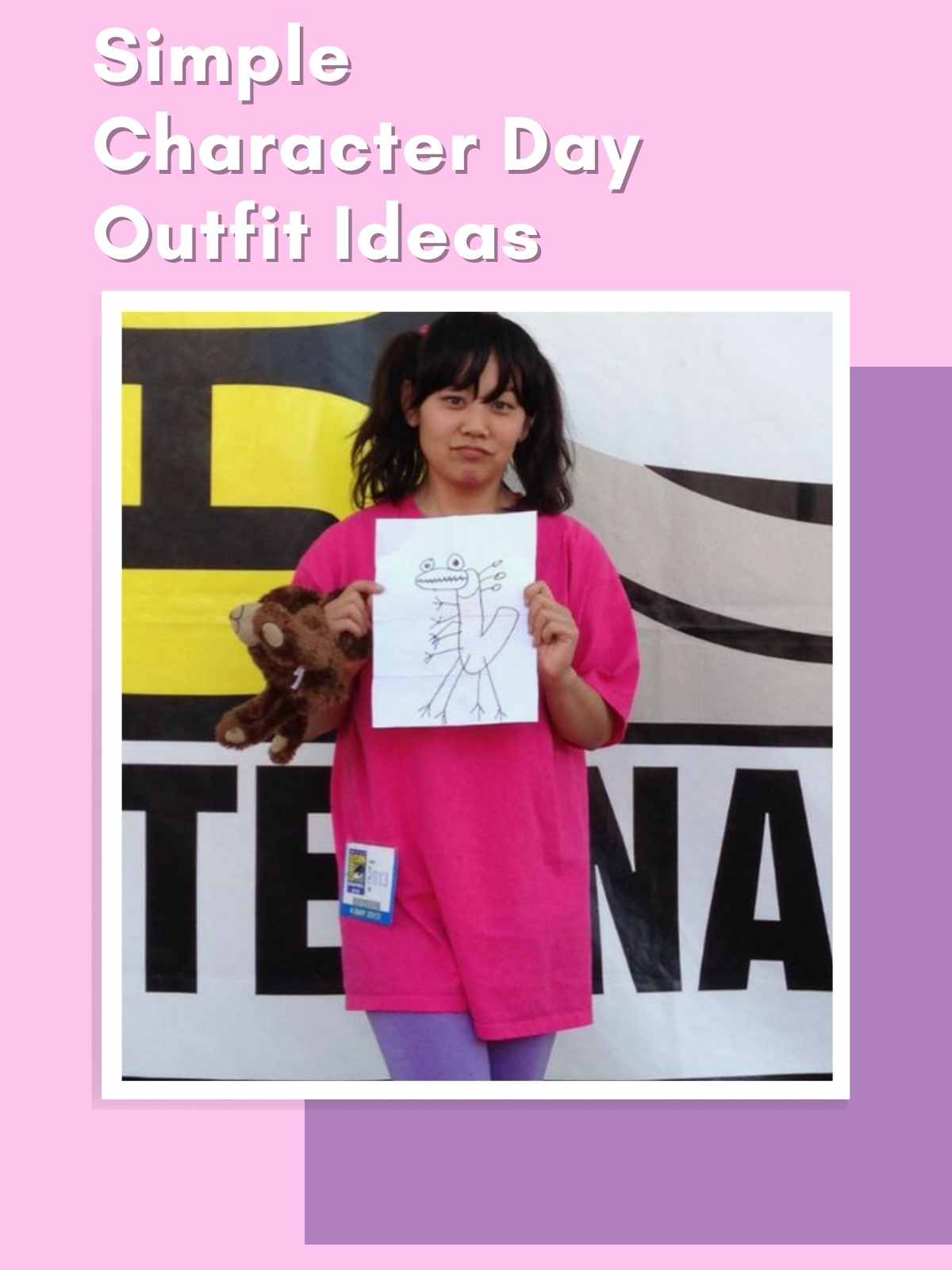 21. Snow White and the 7 Dwarves – I honestly love any character day for spirit week outfit that can be achieved with different colored t-shirts.

22. Riverdale River Vixens – For those Riverdale fans out there, now is your opportunity to dress up as the vixens!

23. Proud Family – This girl KILLED this costume. It’s so simple but so good.

24. Thing One and Thing Two – This is a timeless classic of a character day character choice. You cannot have one of these days without at least 2 people going with this as their character.

25. Tweedle Dee and Tweedle Dumb – These characters always cracked me up when I was younger, so now I have a soft spot for their costumes. How can I not? They are so cute!

26. Number 5 – Tell me this girl didn’t absolutely win character day with this costume.

30. Phil and Lil – Phil and Lil are the perfect characters for this day and yet I feel like they keep being slept on! 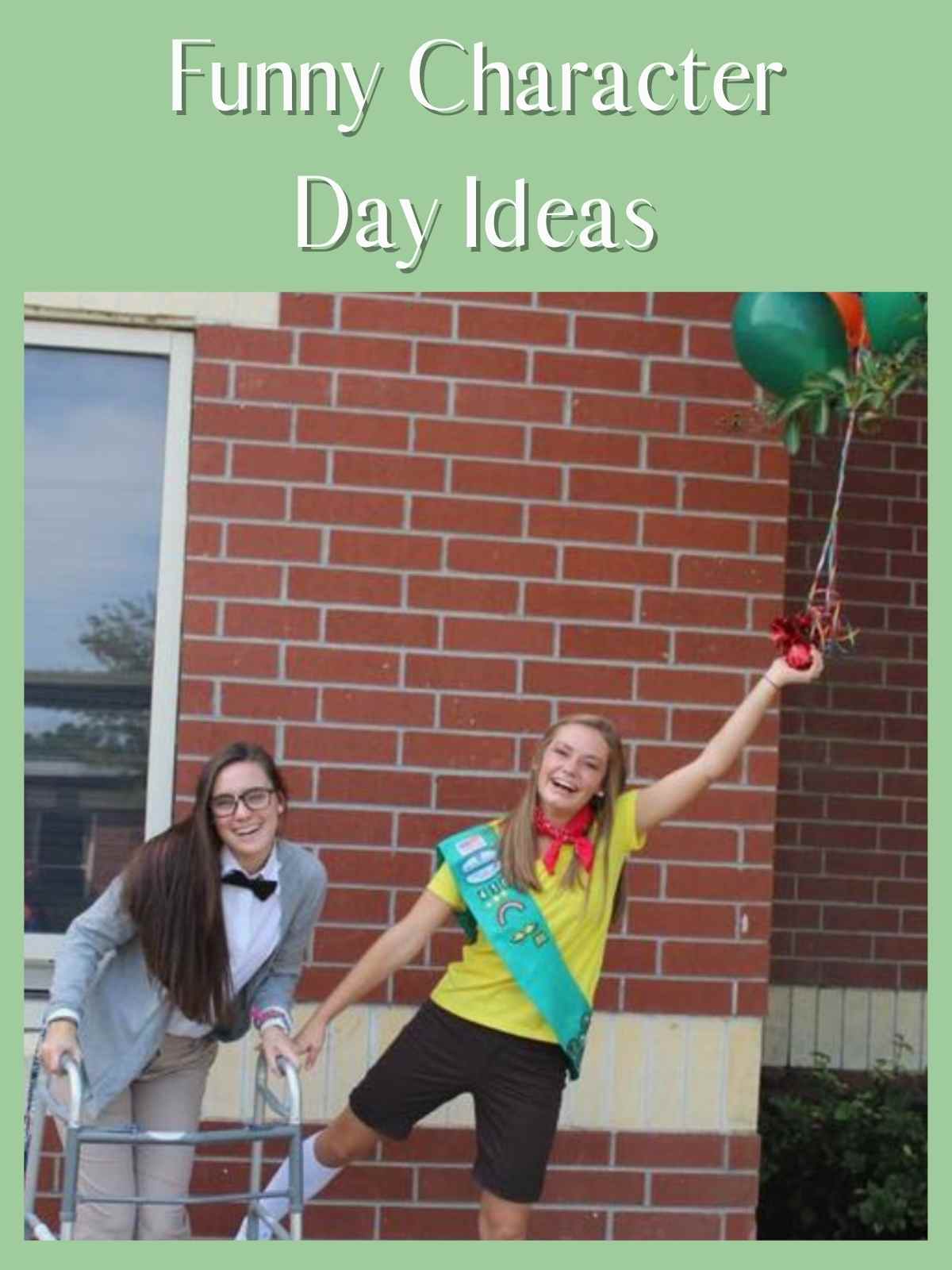 31. Arthur Characters – Arthur the show had quite a few funny character day for spirit week moments that we didn’t even realize until we got older. Now it’s a never ending joke!

32. Mean Girls – This movie was comedic gold, especially this scene. So naturally the ‘you don’t even go here’ guy had to be on this list!

33. Doodle Bob – I can still hear him say his token ‘mihoy minoy’ in that hilarious voice. Probably one of the best episodes of SpongeBob to this day. I’m glad someone chose it for character day!

35. Mermaid Man and Barnacle Boy – One of the best cartoon duos, name a better one. I’ll wait.

36. Power Puff Girls – This show was such a big part of so many people’s childhoods, so I am happy to see it still be remembered. It came out quite a while ago!

37. Charlie Brown Characters – At least they aren’t the adults, then they’d have to talk in gibberish all day.

38. 3 Spidermen – This meme circulated the internet for a few years, so this one is a mix of characters AND meme culture

39. Boo from Monster’s Inc – She is the cutest, cheerio-loving, monster-scaring, squealing little girl the world knows.

42. Golden Ticket – I may have spoken too soon with the one above. THIS one is gold.

43. Cute Up Costume – Up is a very popular thing to dress as during character day, and I see why!

44. Blue’s Clues – Yet another one of those nostalgic TV shows, I am starting to sense a pattern.

45. Sandy Cheeks – Spongebob characters are always a win, but this girl outdid herself.

46. Mario and Luigi – Who doesn’t love our favorite magical plumbers? 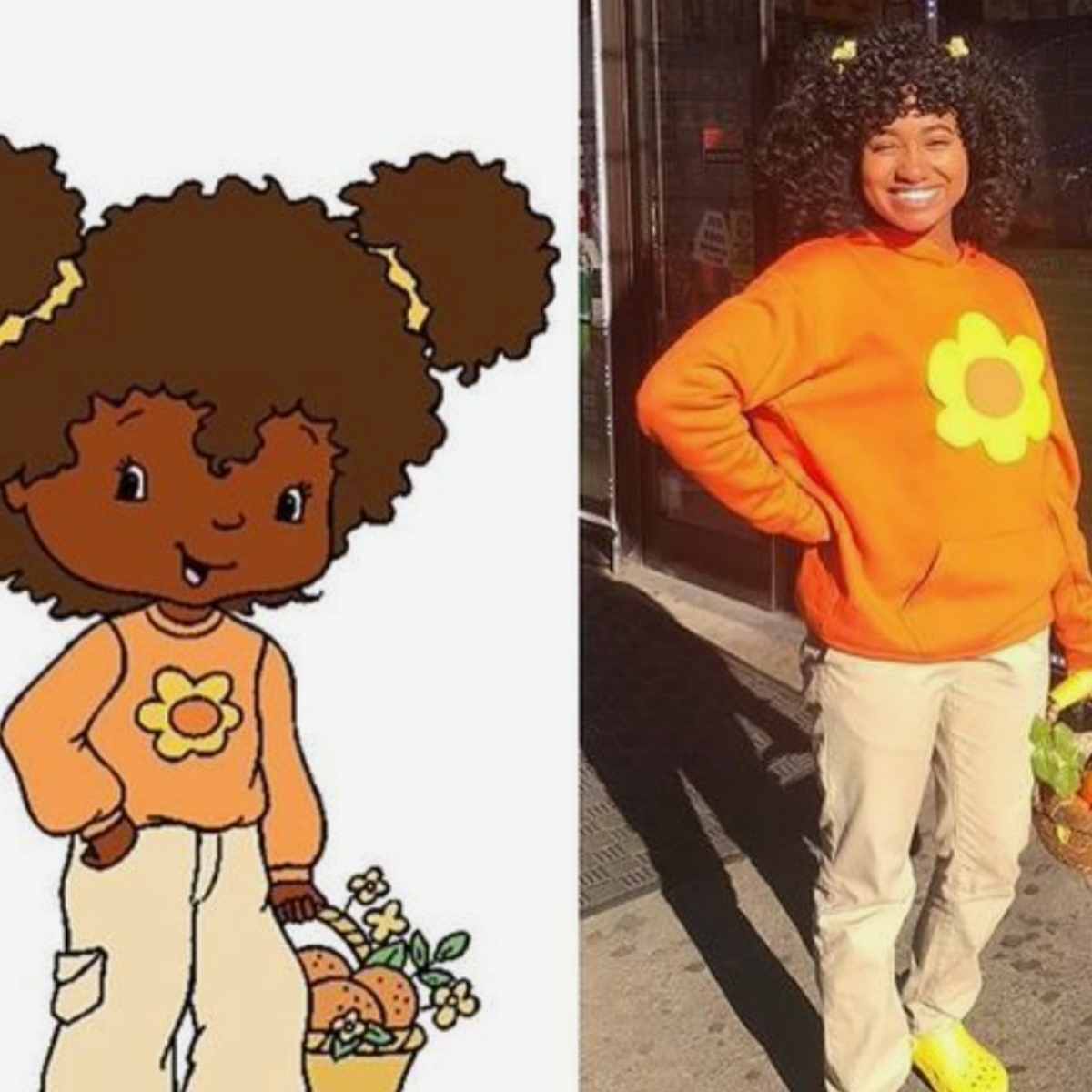 Okay…how cute were all of these? I am kind of sad that I am out of high school because there were so many of those that I wanna get dressed up as but don’t want to wait until Halloween.

I hope you really enjoyed all of my examples and found some inspiration for your own costume.

The most important part of this week is to have fun and dress up, not be the best. So take any pressure off of yourself that isn’t serving you.

Where what you wanna wear for character day for spirit week and what makes you happy. Those are the only things that matter!