Inside: The master list of trivia questions for teens with answers included

Trivia games are a great way to incorporate learning and teamwork into something fun and fresh. You can play these at school, at birthday parties, or even on long road trips.

The hardest part about playing trivia games is finding the questions. Lucky for you, I have created the master list of trivia questions that are perfect for teens and adults alike. You might be surprised by how much your teens know.

I broke this list up into sections of varying difficulty. So we start with the easier questions and then will move on. The farther you get, the closer you are to winning.

The person who gets the most questions correct by the end is deemed the winner. This game is much more fun when you play with lots of people, so gather your friends if you can. 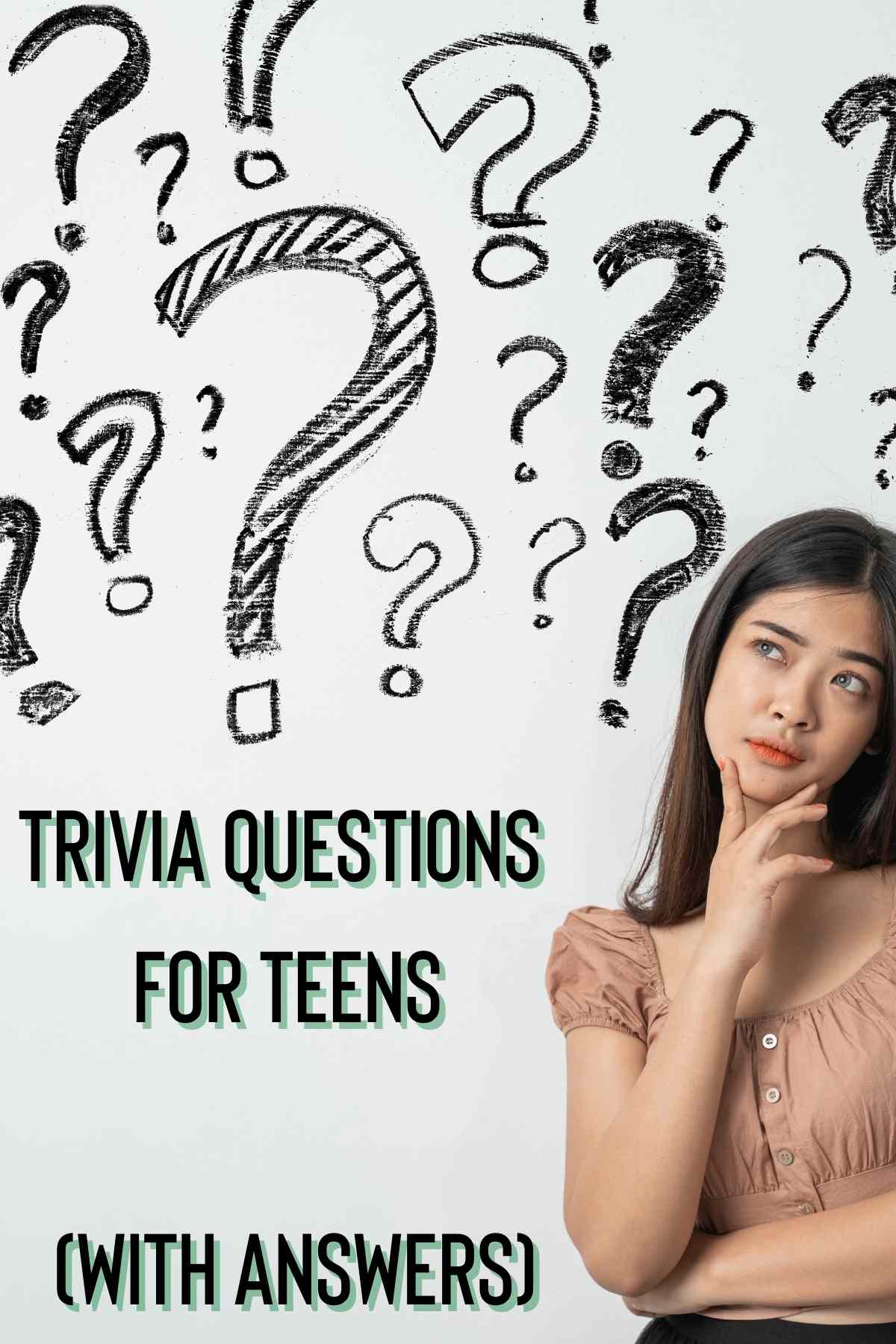 Let’s see who is the smartest in the group!

Let’s kick it off with the easiest questions. But don’t let the title fool you; even some of these can be tricky. If you miss some, don’t feel bad. Just learn the answer, and then you will be like trivia royalty the next time you play a trivia game! So without further ado, let’s stop dilly-dallying and get into this awesome trivia game.

1. In which ocean is the Bermuda Triangle located? Answer: Atlantic Ocean

2. Which U.S. state is known for peaches? Answer: Georgia

3. What is the game show that Steve Harvey Hosts? Answer: Family Feud

4. Who was the most famous person Pete Davidson has ever dated? Answer: Kim Kardashian

5. In the average human body, how many bones are there? Answer: 206

6. How many points do you get for throwing a touchdown in Football? Answer: 6

7. What is the chemical FE symbol for? Answer: Iron

8. What is the temperature at which water freezes? Answer: 32 Degrees Fahrenheit

9. What kind of bean is hummus made out of? Answer: Garbonzo

10. What’s the scientific name for the process where plants absorb their nutrients? Answer: Photosynthesis

12. What U.S state is thought of as the sunflower state? Answer: Kansas

13. What was Bruce Springsteen’s most famous hit? Answer: Born in the USA

14. What kind of pet did Harry Potter Have?  Answer: An Owl

15. What are the primary Colors? Answer: Red, Blue, and Yellow

17. What is the official flower of California? Answer: Golden Poppy

18. In the hit show Friends, what were the main characters’ names? Answer: Ross, Monica, Chandler, Phoebe, Rachel, and Joey

20. What restaurant is home to the whopper? Answer: Burger King

21. What is the number of reindeer that pull Santa’s sleigh? Answer: 8 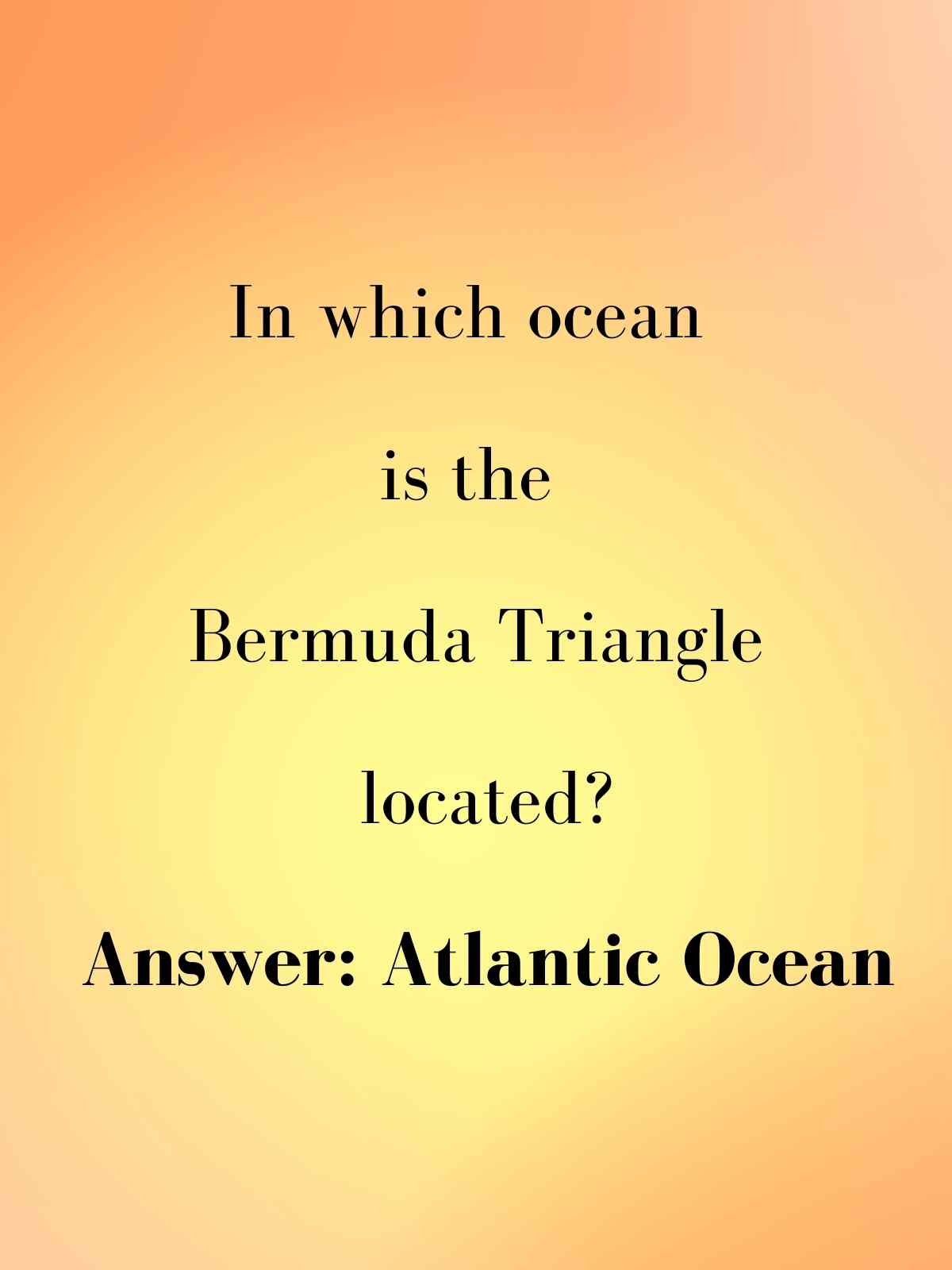 Let’s spice things up a little with this next section. These are moderately hard, so you don’t have to work hard quite yet. You can save that energy for the sections to come. Still, give it your best, and mesmerize the ones you don’t know. That’s what makes this game so beneficial: you are learning while you are playing.

22. What was the year that the first iPhone was released? Answer: 2007

23. What was the original name of Twitter? Answer: Twttr

24. What part of the atom has no electric charge? Answer: Neutron

25. What planet in our solar system has the most gravity? Answer: Jupiter

26. From the Marvel comics, what is Hawkeye’s real name? Answer: Clint Barton

27. What song does Elsa sing in the first Frozen Movie? Answer: Let it go

28.  Who played Jack Dawson in the Titanic? Answer: Leonardo DiCaprio

29. How many Lord of the Rings Movies are there? Answer: 3

30. Who lives in a pineapple under the sea? Answer: Spongebob Squarepants

31. Who played the Wolverine in the X-Men Movies? Answer: Hugh Jackman

32. How many championships did MJ win? Answer: 6

34. How many soccer players does each team have on the field? Answer: 11

35. What kind of fruit were prunes before they were dried? Answer: Plums

36. What’s the coffee capital of the world? Answer: Brazil

37. What country is known for its Vodka consumption? Answer: Russia

39. What organ has four chambers? Answer: The Heart

41. What elements is known to strengthen your bones? Answer: Calcium 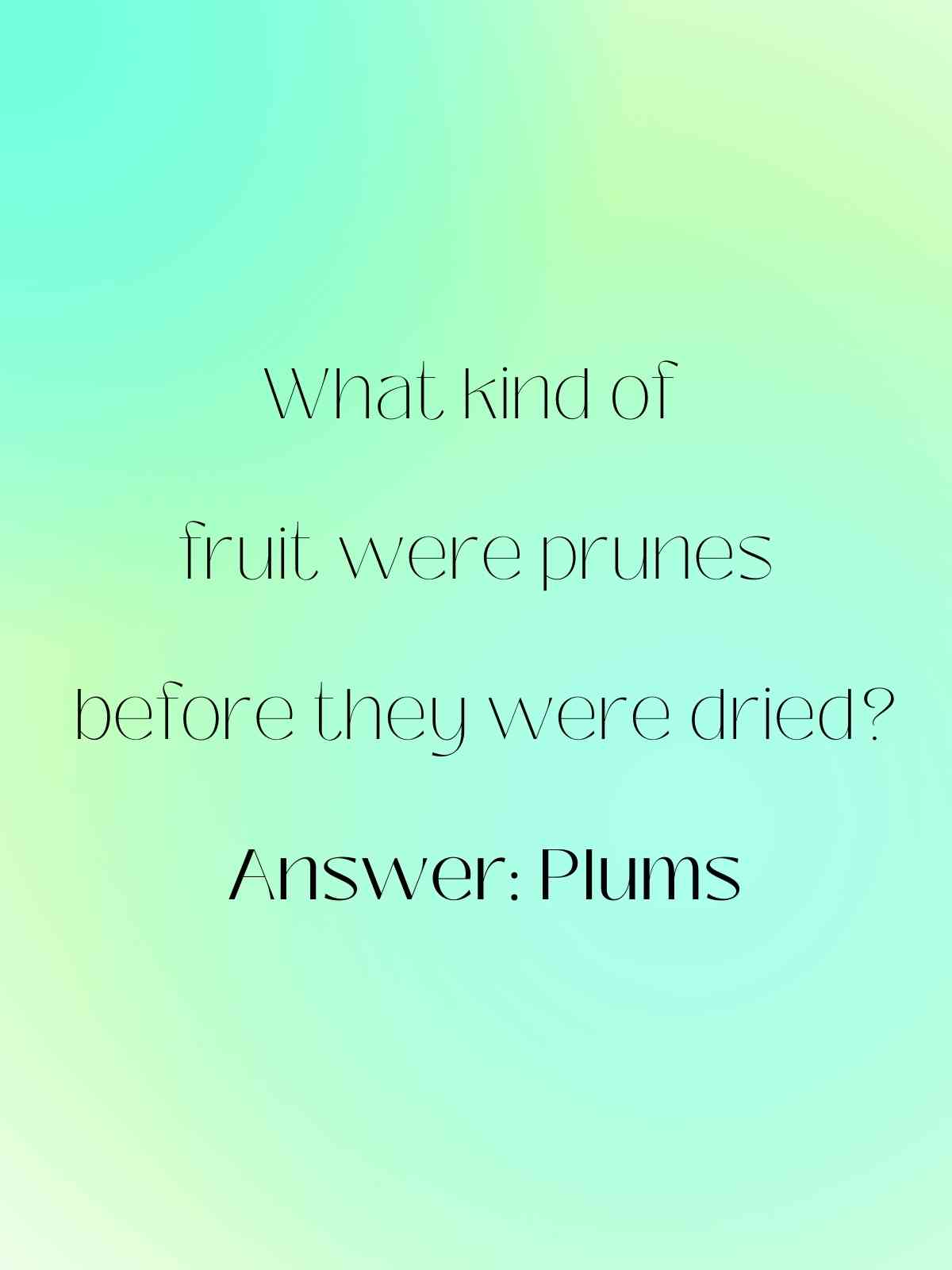 Alright, let’s turn up the heat. Who thinks that they can handle the hard trivia question section? It’s a pretty hard thing to get past, but I have a good feeling that you are totally capable of making it.

What are you waiting for? Dive into these hard trivia questions for teens.

43. What color does a gold leaf look like in the sun? Answer: Green

44. What is the capital of Paraguay? Answer: Asuncion

46. Who else was murdered next to OJ Simpson’s late ex-wife? Answer: Ronald Goldman

47. What were the three fates of greek mythology? Answer: Atropos, Lachesis, and Clotho

48. Was there ever a British pope? Answer: Yes

49. What land animal has the largest eyes? Answer: Ostrich

51. About how many square miles is the earth? Answer: 196.9 Million Miles Squared

52.  What sea is near Saudi Arabia? Answer: The Red Sea

53. Who was the author of Around the World in 80 Days? Answer: Jules Verne

54. What actress tried to hire her hitman to kill her? Answer: Angelina Jolie

55. What is a group of hippos called? Answer: A Bloat

56. What color was the Statue of liberty when she was originally built? Answer: Copper

57. What is the little dot that resides above lower case j and i called? Answer: Tittle

58. Who was the first person to win a noble prize for medicine? Answer: Emil von Behring

59. What was the pig’s name in George Orwell’s Animal Farm? Answer: Napoleon

60. What does the E stand for in Chuck E Cheese? Answer: Entertainment

61. Who is the author of the famous book Flowers for Algernon? Answer: Daniel Keyes

62. What is the hallux in the human body? Answer: The Big Toe

63. What was the name of Alexander the Great’s Horse? Answer: Bucephalus 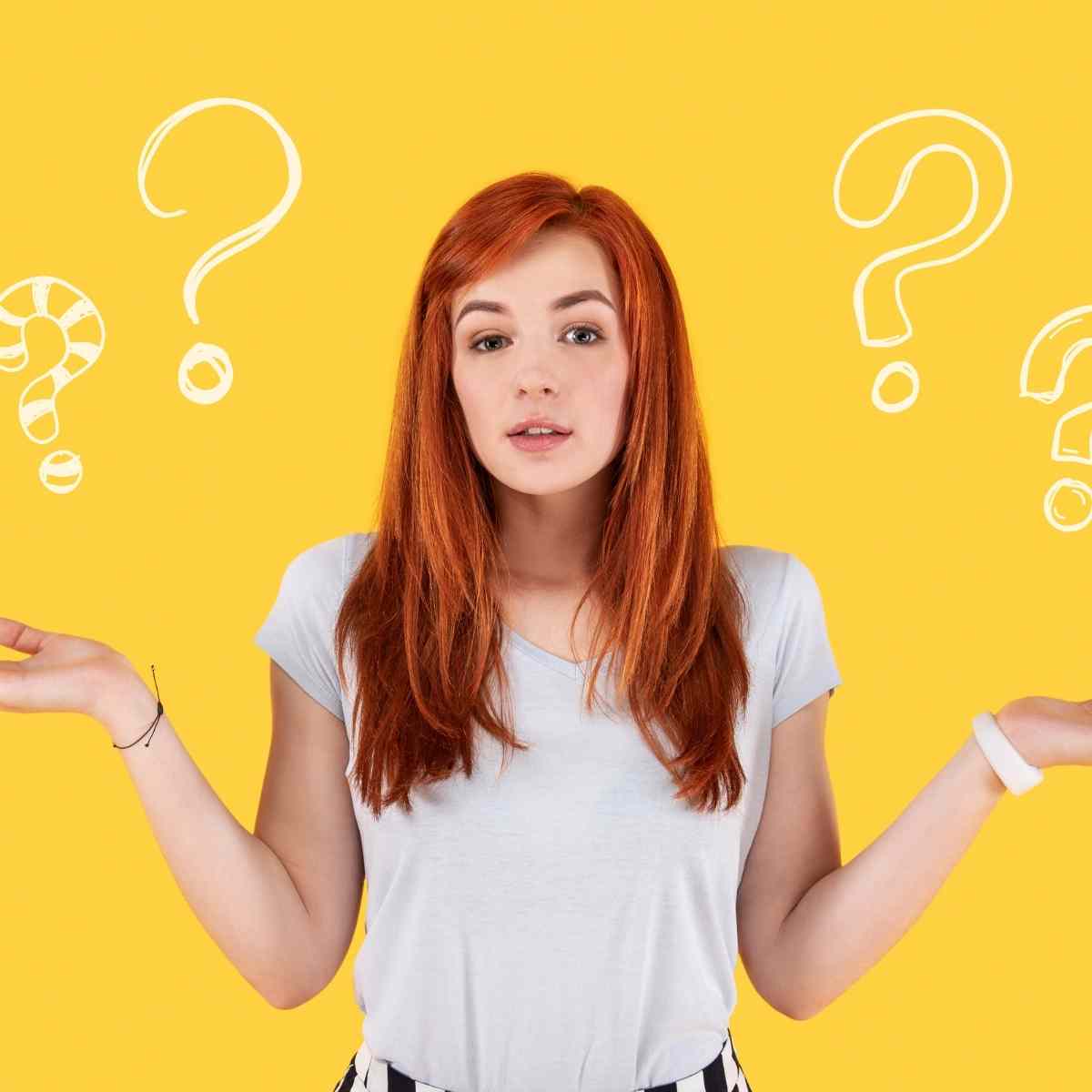 At last, here we are, at the last section of the game. How are you doing so far? Be proud of yourself; this game is no easy thing to accomplish. Who do you think is winning? It doesn’t matter much anyways; the real winners are those who learned the most during the game.

Don’t let the name of this section scare you, you are totally gonna rock this.

64. What is the deepest lake in the world? Answer: Lake Baikal in Russia

67. What is the most expensive painting to be sold? Answer: Leonardo da Vinci’s Salvator Mundi

68. What is Swedens annual percentage of household garbage in landfills? Answer: 1 Percent

69. What is the oldest city in the world? Answer: Aleppo, Syria

70. What does the word Battologize mean? Answer: Repeating something too much

71. If a shape has 999 sides, what is it called? Answer: An enneahectaenneacontakaiennagon

72. What country consumes the most chocolate? Answer: Switzerland

73. What is the opposite of Deja-Vu? Answer: Jamais-vu

74. What were the earliest forms of female contraceptives made of? Answer: Crocodile Dung

75. Which US States don’t participate in daylight savings? Answer: Arizona and Hawaii

76. What is the smallest bone in the human body? Answer: The Stapes

77. What is the loudest animal living on the planet? Answer: Sperm Whale

78. How many trees are there? Answer: 3 trillion

79. What are the flaps on cat ears called? Answer: Henry’s Pockets

80. What is the largest county in the US? Answer: San Bernardino County

81. What is the word for the space between windows? Answer: Interferonestration

82. What is the name for people who fear cooking? Answer: Mageirocophobia

So…how did you do? I told you it was surprisingly hard! But games like this are so beneficial. They not only teach you the art of teamwork, cool facts, and that it can be fun to learn, but you get to expand your brain and bond with the people around you. So I hope you loved these trivia questions for teens.

If you didn’t win, don’t worry. Now you have a goal going forwards: Practice your trivia! Then by the next game, you will be invincible. I have found that every time I play, I get better and better.

Practice makes perfect; you got this!